It’s difficult to say, with any great certainty, what WO Bentley would have made of the idea of an Electric Bentley. The great engineer famously refused to finance the supercharged “Blower” Bentleys in 1929 as the whole idea of supercharging went against his principles of natural induction engines. However,  this was a man who earned his MBE by designing a revolutionary aero-engine in the First World War, so perhaps he would have relished the challenge of finding new ways to propel vehicles in the 21st Century.

For a few years now, speculation has been mounting that Bentley’s current custodians were toying with the idea of an EV. Following the 2015 unveiling of the spectacular Speed-6 Concept, the concern grew in the motoring press that the stunning design would be shelved in favour of an electric model, most likely a Bentayga EV.

This year, however, the Crewe company confounded expectations, bringing the best of both worlds to the 2017 Geneva Motor Show. The spectacular EXP12 Speed-6e concept is a white, convertible EV version of the same 2015 show-car.

Bentley are keen to stress that the concept is about showcasing a design language, introducing advanced technologies, and trying out new power-train options, all of which may be applied first to the 2018 Bentayga SUV. Wolfgang Dürheimer, Bentley’s CEO, said at the launch, “This concept enables us to engage with luxury customers and gather feedback on our approach. Bentley are committed to offering an electric model in its future portfolio and we are interested to receive feedback on this concept.” The second showing of a Speed-6 concept, however, will reassure fans that Bentley might not be leaving this model on the shelf after all.

While EV packaging remains in a state of evolution across the industry, Bentley are leaning heavily on the benefits of induction charging – that’s when the car absorbs power wirelessly when positioned over an induction plate. This will be more convenient for owners who don’t want the hassle of plugging in cables at home but also, should the road infrastructure adopt induction charging technology, the need for massive on-board battery packs would be reduced. Until that infrastructure is in place though, the best platform for EV technology remains the large SUV, rather than the sports car.

Bentley might not be re-inventing the wheel when it comes to electric motoring, but no-one seems to have told this to the Speed-6e’s interior designers, who have once again produced an interior of inspiring originality. The rich, red leather (think: Chesterfield sofa) extends to the extraordinary cropped steering wheel, with joystick-style buttons mounted on the wheel-ends at the 10-to-2 positions. One button will add a boost to the electric power delivery, while the other sets a speed limit for urban driving. 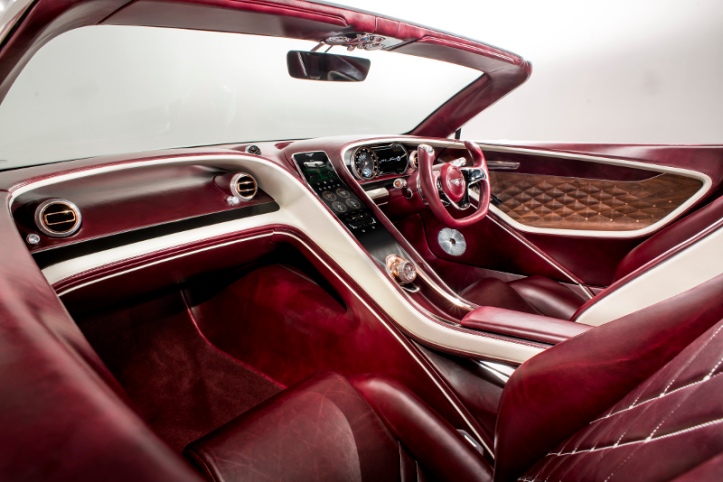 As far as the user experience is concerned, Bentley is really beginning to integrate the lifestyle of owners into the operation of the car. Infotainment systems will be more consistent with the interface users are already accustomed to with their smartphones and tablets, and will behave more like a personal concierge service for driver and passenger.

The question remains whether the Speed 6 and 6e concepts will become models in their own right, or evolve into the next generation Continental family, but we can be certain, either way, that Bentley is about to enter a whole new dimension.

This site uses Akismet to reduce spam. Learn how your comment data is processed.